A few months ago I bought a Canon 17-55mm f2.8 IS USM lens that had been playing up (read: broken) off a friend. The lens worked for a while on my 60D body (excluding the aperture strangely oscillating during video recording) but eventually succumb to the same fault.

So after a bit of poking around the internet and finding out how to disassemble the lens I started work on it.

Since the fault was intermittent I assumed that one of the internal ribbon cables may have been damaged due to the zoom mechanism of the lens, so I bought a replacement ribbon cable and got to work. 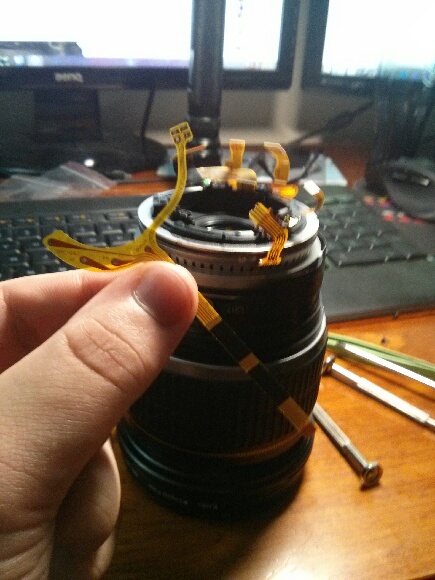 Unfortunately after removing a fair few of the lens sub assemblies I was forced to abandon my efforts on account of one screw that wouldn’t budge due to the locktight on its thread. I may have also managed to burr the head of said screw in my various attempt to remove it, so yeah… At any rate it is now back together again and for the time been currently operational. I kinda figure when it decides to stop working again I’ll have another go at replacing the cable.