A few weeks ago my work bought an Ultimaker 2 3D printer for rapid prototyping mechanical hardware components. As you’d expect over said weeks of having this 3D printer we have been printing test models to get a more intuitive feel for which settings to use for certain parts and to see how well the printer performs with replicating the models. 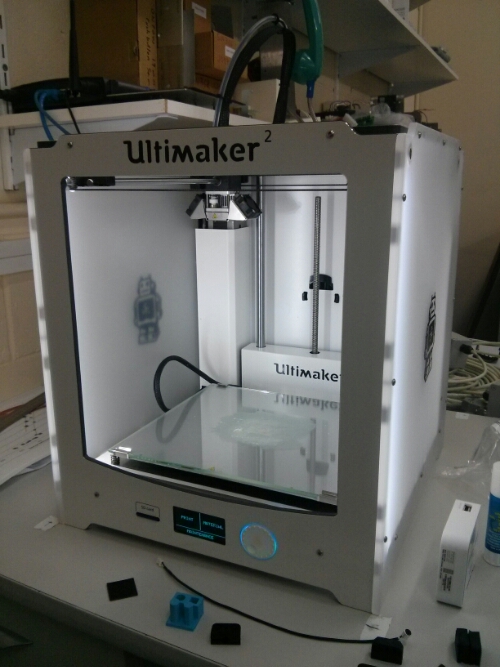 So yesterday for a print test I decided to print a small racheting torque wrench (to test how the printer handles printing parts with moving mechanical components) designed by a company called Made in Space for the International Space Station (ISS). While this wasn’t the first object printed in space it was the first printed to meet the need of an astronaut whom would have otherwise had to wait until the next supply shuttle for his beloved wrench which could be months away.

The wrench took 4 hours to print with each accessory’s clocking in at 1 hour each using a speed of 50mm/s, 0.1mm layer height and 20% infill. The print itself turned out very well and functions perfectly even if it doesn’t have the smoothest operation.

Possibly the most impressive thing about building this wrench is the thought that has gone into the design of the internal ratcheting mechanism which is most evident halfway through the print.

Above you can see the gear around the socket as well as the lever (FYI I don’t know the proper technical names for these parts just making stuff up) which on the right has a small piece of plastic that touches the side wall and acts as a spring.

Also as you’d expect it does indeed perform to the torque rating of 3 in-lb etched onto the side of the wrench (even managed to get up to 10 in-lb without mechanical failure) however I find it curious that the rating is in in-lb (inch-pounds) and not the metric unit of N.m (newton meters) especially since NASA officially switched over to the metric system in January 2007. Perhaps Made in Space didn’t get the memo.

By far this is my favourite object that we have printed thus far and If you have access to a 3D printer and want to try it yourself you can find the part from NASA’s website here.